RitchieCam is a new camera application developed by Ritchie Roesch. Roesch set out to create a camera app that was both universally simple but still able to take compelling photos.

Roesch has previously created apps designed to contain recipes for Fujifilm and Ricoh GR cameras, but has been working on a new camera app with developer Sahand Nayebaziz to target what Roesch sees as an underserved aspect of the market: the desire for great photos that don’t require editing.

Bringing the Fujifilm experience to iPhone

Basically, Roesch realized that while he was simplifying his workflow with his large format cameras, he wasn’t achieving that level of simplicity with his iPhone.

“I noticed that my shooting process with my iPhone was very different from that with my ‘real’ cameras,” he explains. “You see, I’m a JPEG photographer straight out of the camera. I do not retouch my photos. I’ve created over 250 JPEG camera settings for Fujifilm X and Ricoh GR cameras to achieve various in-camera looks, many of which are based on classic film – no Photoshop needed (or any other photo editing software). 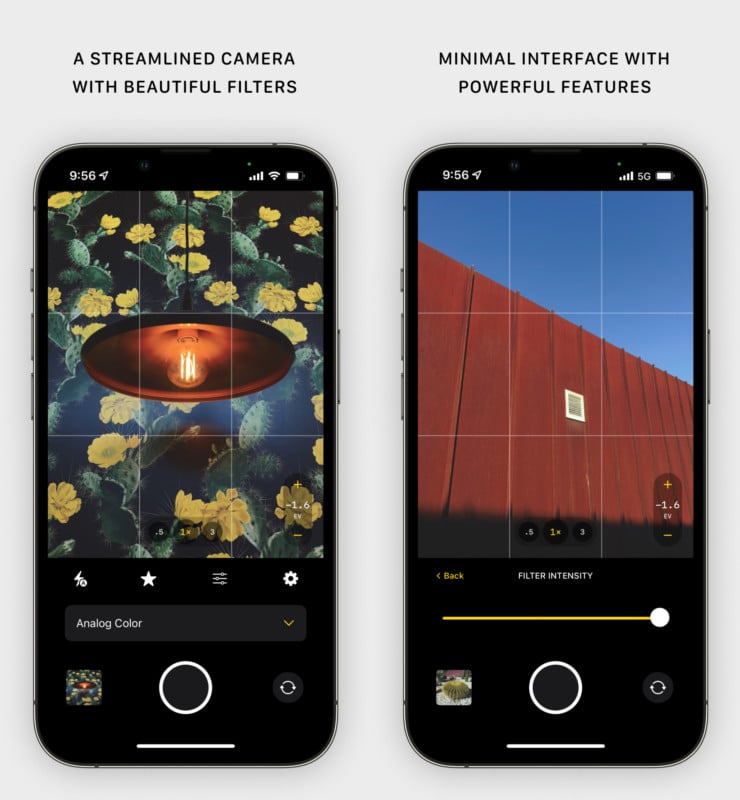 Roesch says that about a year ago he noticed that most of the photos he saw in his social feeds were unedited smartphone photos, but were still captures of important moments in people’s lives.

Roesch wanted to create a way for iPhone shooters to get great photos straight out of the camera, like he does on his Fujifilm cameras.

“I started researching and of course camera apps that can do this already exist, but why aren’t they widely used? What I’ve determined is that these apps are often designed for photographers, and not necessarily for the general public,” he says. “What was missing was a simple and intuitive app, designed similarly to the iPhone camera app that comes standard on your phone so anyone can be comfortable using it, by having nice built-in filters ready to go as soon as the app is opened.”

The basis of these discoveries is at the heart of how RitchieCam works. The second it’s opened, it’s ready to take better quality photos with no modifications needed. Roesch says the app has minimalistic and intuitive controls that are easy for beginners to grasp but still useful for more experienced photographers.

“If you’ve ever used the Camera app that comes standard on your iPhone, you should feel right at home with RitchieCam,” says Roesch. “Design and fictionality are meant to be familiar. The learning curve is very minimal – literally anyone can master this app very quickly. Features like EV +/- and Filter Intensity are great tools for those who just want a little more control over their photos.

The RitchieCam app offers 17 filters, 14 in color and three in black and white. Roesch says all of the filters are film-inspired, a craft he became particularly good at while creating the many recipes available in his Fujifilm and Ricoh GR apps.

“Inspired by film, I designed these filters to have an analog essence. None of them are meant to mimic any specific film exactly; instead, they’re designed to produce memory-like color analog,” he explains.

Examples of all 17 filters can be seen on the RitchieCam website.

RitchieCam is free, and Roesch says it never plans to include ads. It also says it won’t sell any user data, as the app doesn’t even collect it. Monetizing the app is much simpler: it’s free to download and use, but operates on a “freemium” model: a one-time payment of $10 fully unlocks all filters and features.

RitchieCam is available on the Apple App Store.