From the moment Jenna Brown gave birth to daughter Sydney in February 2020, she called her “Love.”

Like most new parents, Jenna and her husband, Jeremy, of Oswego, knew life was going to be very different. They just didn’t realize how different it was.

Sydney Brown after surgery to remove the tumor on June 17, 2020. Days later, she would be diagnosed with pediatric neuroblastoma.
– courtesy of the Brown family

When she was 2 months old, the couple noticed a bump on the side of Sydney’s neck. They were sent to see an endocrinologist and an ENT. After several scans, the ENT determined it was just excess tissue, but it needed to be removed because it was where his carotid artery had split.

Since the artery supplies essential oxygen to the brain and head, the doctor thought it best to remove the tissue.

“The doctor said they took it out all at once,” Jenna said.

Sydney had to stay at Loyola University Medical Center for a week, and the Browns thought the worst was over. Until a floor doctor came into their room on June 23, 2020 and asked them what they knew about neuroblastoma.

It turns out Sydney’s tumor was malignant.

“I didn’t know what he was talking about,” Jenna said. “I told him he was in the wrong room.”

The doctor informed Jenna that an oncologist would come to talk to them about the diagnosis.

“It took a while for everything to register,” she said. “I called my parents and said, ‘I think they just told me Sydney has cancer.’ “ 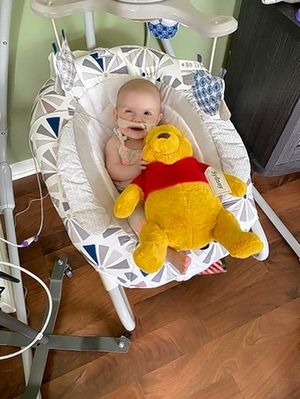 Sydney Brown shows off the smile that inspired Love Smiles, a website and app featuring authors and illustrators who read their books to children to pass time during chemo.
– courtesy of the Brown family

What followed included more scans and urine samples every three weeks to track his blood cell count. At first, Sydney’s numbers were okay, but then they started to increase. It was then that his doctor decided that it was best to act.

The Browns learned that their young daughter would undergo eight rounds of chemotherapy at just 8 months old.

“Here I had this little baby and all I could think about was how sick she would be with the chemo,” Jenna said. “I thought about how adults reacted to it. But they told me babies reacted to it differently.”

Turns out they were right.

“It’s a journey,” Jenna said. “She was spending 9-10 hours a day in chemo and smiling all the time. She didn’t want to take a nap because she wanted to see the nurses. I was losing my mind, but she was so happy and content all the time. I can’t even begin to tell you how amazing the staff were with her.

Because of COVID-19, friends and family couldn’t visit, so Sydney knew these nurses better than anyone.

“A nurse once asked if she could take her out and walk her around on the floor to give me a break. Here’s the little beauty pageant queen being carried around and waving to everyone,” Jenna laughed. 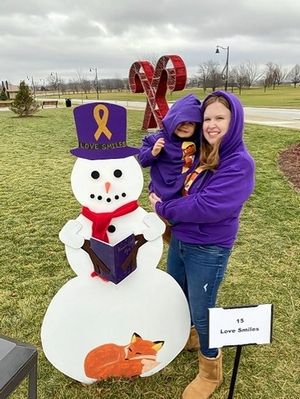 Jenna and Sydney Brown at Homer Glen Snowman Lane 2021 sharing the Love Smiles snowman to raise awareness for the charity and childhood cancer.
– courtesy of the Brown family

But it was those simple moments that got the Browns through the tough times.

“Just seeing her being a kid and doing what babies do. If I survived all of that, she was smiling, laughing, playing with the nurses. I thought, ‘We can do this. !” “

Escape into a book

But that doesn’t mean the days have gotten any easier, especially emotionally.

“There were days when I was fine, and we were always fine ahead of her,” Jenna said. “But there were days when I showered and cried. I was angry that this happened and sad that she missed so many things. But then I felt guilty. My child was going to be okay. Other families don’t always understand that. Who was I to feel that?”

Her friends and family told her that it was natural to feel what she felt and have her emotions, but not to indulge in them.

A friend asked her when she felt most relaxed and at peace. She said when she and Sydney are sitting down to read a book.

“It was just the book escape,” said Jenna, a certified reading specialist, most recently with Aurora East School District 131. packaging for the hospital.”

And that’s when it clicked.

What if it could give families a few minutes of worry-free time with their children?

And that’s when smiles of love was born.

Love Smiles, a 501(c)(3) nonprofit organization, is dedicated to raising awareness of childhood cancer while providing moments of peace for families dealing with the disease. The nonprofit partners with authors and publishers to share their stories and activities with pediatric cancer patients.

Families can download an app, available from the Apple and Google app stores, and have access to videos of authors reading their books or illustrators teaching children how to draw a character, as well as other activities .

When the idea first came to Jenna, she thought, “Am I crazy? Is it too big?

Turns out, with a little help from her friends and writers she knows, the dream came true. 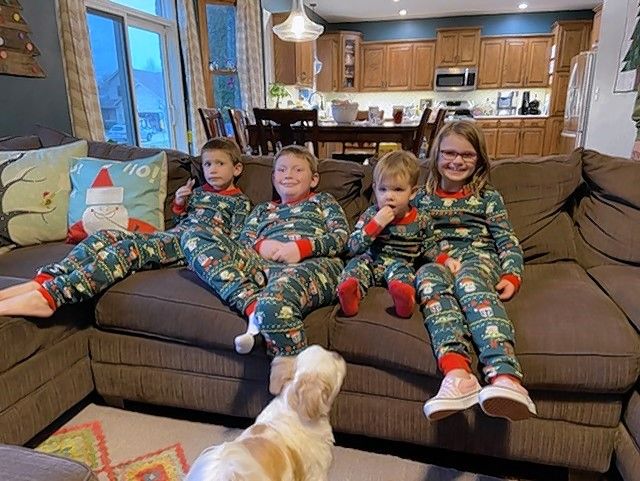 A moment that has been preparing for almost two years, to celebrate Christmas 2021 between cousins. Pictured with Sydney, Leo, left, Griffin and Harper Kmitch, as Dublin looks on.
– Courtesy of the Brown family

She launched the organization in October 2020, but the app and website launched on June 23, 2021, a year to the day after Sydney’s diagnosis.

“It’s a great memory from where we started to where we are now,” Jenna said.

In no time, the website, love-smiles.org/and the app has a cache of onboard authors and illustrators to help kids get through hours in the hospital.

The app also allows parents and children to share their stories to raise awareness about childhood cancer, which is Jenna’s favorite part of the app.

“Families can share their stories and what they’ve been through. People are always asking ‘what can I do,’ but during COVID there’s nothing anyone can do. That’s what we can do. It’s a hard journey, and the more people around you the better.”

Finding funds to run the app proved to be a bit difficult. Jenna says the grants are hard to get because they fall into different categories and cater to different age groups. While they organize fundraising activities, such as quiz nights and an upcoming walk in June, she also hopes to secure more corporate sponsorships. 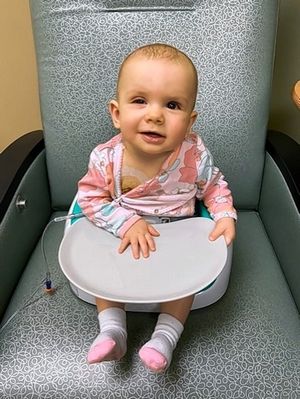 Sydney Brown was just 8 months old when she started chemotherapy treatments for neuroblastoma. But her mother, Jenna, said she handled it with lots of smiles.
– courtesy of the Brown family

The funds she raises are used to update the app and website, as well as comfort kits, which include copies of the books of the authors they work with, as well as coloring books, crayons, sketchbooks and other age-appropriate items.

“We welcome all ages because all ages go through it. We want them to be able to watch the video, read a book, or draw and color to make their time in chemo go by faster,” Jenna said. “We want to give them as many opportunities to relax as possible.”

So far, Love Smiles has partnered with Loyola, UIC, Edward-Elmhurst Healthcare and UMass Memorial in Massachusetts.

The hope is to expand it nationally or even globally to help bring smiles to children who are battling a terrible disease.

“The smile on his face helped everyone through it,” Jenna said. “It’s been a crazy trip, really beautiful.”

To celebrate Sydney’s birthday on February 21, Love Smiles is sponsoring a Give Back event. Through February, the organization is asking people to create cheer cards for pediatric cancer patients and their parents, which will be added to comfort kits. Send cards to: Thrivent, Attn. : Kim Burbank, 16612 W. 159th St., Unit 201-LL, Lockport, IL 60441.

To make other donations or to learn more about Love Smiles and upcoming fundraisers, visit www.love-smiles.org.